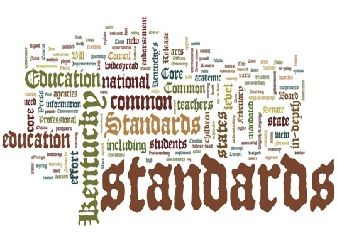 Modeling the integration of global education into core standards. No matter what state you teach in, everyone has something they are responsible for teaching.  Teachers can help develop global competencies within their students by embedding global education concepts into the material.

I used the Virginia Standards of Learning (SOLs) that are evaluated each year.

In 7th grade English, text structure is a huge part of the end of the year SOL reading test. Off and on for the past two weeks, my students have been reading newspaper articles, noting the different parts of a newspaper article, and the text structure (inverted pyramid structure). At first, I had the students find a newspaper article about another country that had that text structure. I had a bunch of newspapers: New York Times, Washington Post, USA Today, and local papers. They had to label the parts and create the inverted triangle brainstorm for the article.

I added the onlinenewspapers.com site to my lesson to find a newspaper article that follows the structure from an international newspaper. I told them that I wanted them to look up an article that connects with their language class: Spanish, French, or German or for some, if they are a ESL/ELL student in their native language. They were very excited! A large percent of my students are in the second year of a language and are excited when they figure out what the article is talking about. Next week, we are grouping the students by languages, so the students who are taking Spanish can share their articles with other students taking Spanish etc. My kids are hooked on this site. I need to find some creative ways to continue to use it. I am thinking about maybe taping them reporting on an article while speaking that language.

1. SOL 7.9 The student will apply knowledge of appropriate reference materials to produce a research product.

c. Use technology as a tool to research, organize, evaluate, and communicate information.

3. RECOGNIZE PERSPECTIVES--Examine perspectives of other people, groups, or schools of thought within and about texts and media from around the world, and identify the influences on those perspectives.

4. Students will write a four or five paragraph literary analysis stating how the author's life influenced his or her writing.

1. SOL 7.5 The student will read and demonstrate comprehension of a variety of fictional texts, narrative nonfiction, and poetry.

3. COMMUNICATE IDEAS-Recognize and express how diverse audiences may perceive different meanings from the same texts or media and how those different perspectives effect communication and collaboration.

4. The student will type up the two poems and produce a literary analysis (4 or 5 paragraphs) comparing the two poets and the theme.

1. SOL 7.6 The student will read and demonstrate comprehension of a variety of nonfiction texts.

2. Students will use the online international newspaper site, http://www.onlinenewspapers.com/ to find two newspapers. First, they have to find one in the language in which he/she is enrolled in at school. The other article is another from another country that interests them.

3. INVESTIGATE THE WORLD-Use a variety of domestic and international sources, media, and languages to identify and weigh relevant evidence to address globally significant researchable questions.

COMMUNICATE IDEAS-Select and use appropriate technology, media, and literary genres to share insights, findings, concepts, and proposals with diverse audiences.

4. Get in groups of similar languages and discuss their articles. Students in the second year of a language, can help the first year language students. I would monitor each group assigning a participation grade. Then students will have to do an inverted pyramid brainstorm (text structure) on their article.

1.  7.7 The student will write in a variety of forms with an emphasis on exposition, narration, and persuasion.

3.  RECOGNIZE PERSPECTIVES--Examine perspectives of other people, groups, or schools of thought within and about texts and media from around the world, and identify the influences on those perspectives.
TAKE ACTION- Identify and create opportunities for personal or collaborative actions, events, issues, or phenomena in ways to improve conditions.

4.  Students will mail the letters to the governor, representatives, and/or senators.

2.  Students will explore the persuasive power of advertising by analysis of a narrative television advertisement, print ads, and a short animated documentary.


3.  INVESTIGATE THE WORLD-Develop an argument based on compelling evidence that considers multiple perspectives and draws defensible conclusions.
COMMUNICATE IDEAS- Select and use appropriate technology and media to communicate with diverse audiences.
TAKE ACTION- Identify and create opportunities for personal or collaborative action to address situations.

4.  Advertisements are persuasive texts.  Students will explore the topic of the lack of water in the world.  Students will watch a video about children needing a new water pump to have clean water.   Explain to students that they will work in creative teams to write a script for a narrative-style public service advertisement to persuade viewers not to buy bottled water, relating this to the fact that, unlike people in many developing countries, most people in developed countries have access to clean tap water. Their advertisement will aim to change thinking and behavior patterns by working on viewers’ senses, emotions and thoughts, perhaps using shock value or humor.